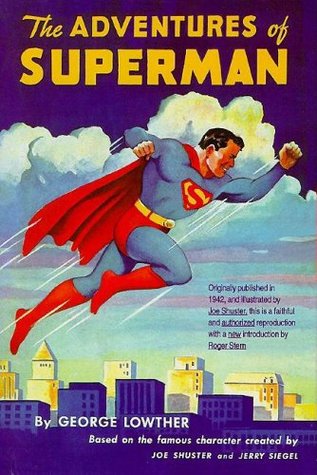 As one must, let’s start this ongoing look at tie-in novels at the very beginning of comic book prose novels, though I should stress I’m definitely not just covering comic book prose. But few properties have lent themselves to the medium nearly as well as comic books. Why shouldn’t they? Comic books are stories often told by writers other than the creators and frequently work as entertaining stand alone stories. They work great here.

Inevitably, the first superhero to jump from panels to prose was Superman, making the leap a mere four years into his existence. Seriously Superman caught fire ridiculously fast. So fast in fact that this novel represents a fascinating look at a character long before canon existed. Because make no mistake, this book does not follow any continuity we know. Yet, at the same time it also created some very key pieces of the canon.

The book tells a fairly familiar story to modern readers. Krypton is doomed. Jor-El sends his son to Earth. He’s found by the Kents. They raise him as their son. He develops powers. He adopts the Superman identity. He fights crime. He goes to the Daily Planet newspaper where he meets Perry White and Lois Lane, both filling their standard roles. He brings down a villain’s plot. It’s pretty normal Superman stuff.

In fact the big deviations are really just in names and powers. Ma and Pa Kent are Sarah and Eben instead of Martha and Jonathan Kent, names not given until 10 years after the book was written. Superman doesn’t really fly as much as bound. And of course the villain is far from a supervillain. It’s more of a Scooby-Doo plot really.

Then there are the deviations from what canon existed at the time. Jor-El and Lara were Jor-L and Lora in the comics. The Kents raising Clark differs from Action Comics #1 where he grew up in an orphanage. Kryptonians dissenting from Jor-El first joined canon here. As did the idea of Clark gradually manifesting his powers. These ideas would later show up in other media and ultimately the comics themselves.

In fact the great shock of this book, this 76 year old text, is how utterly satisfying it is to a modern fan. This feels quite plausible as a Superman story. It drips with the charm of the golden age. The plot feels very Hardy Boys but most importantly it feels like the golden age comics. The characters are shockingly set in stone, especially the flinty and driven Lois. As for the man himself, he’s perfectly noble and good hearted.

This is also an extremely well written book. Lowther puts genuine emotion into the first half. He makes you care about Clark Kent and the doomed Krypton. When Pa Kent dies, it’s quite moving. He then delivers a deliciously pulpy, intriguing mystery in the second half. Even though this was clearly aimed at a younger audience, I found it a rapid page turner.

What this really shows is how fully formed Superman was as a myth, even at the start. From the first stories, he was a crusader for the underdog imbued with the best ideals of the midwest. His origins were clear, a modern version of a demigod descending from the heavens. Even in his civilian identity, he took on a job as a warrior for the common man. The very archetypal ideas permeate this story.

Ultimately I went looking for an artifact and found a surprisingly robust chapter in Superman’s history. The Adventures of Superman is no longer in print but I found it on Amazon for a decent price. This one is well worth discovering.

Next time: The Avengers Battle The Earth-Mover

One thought on “The Tie-Ins That Bind: The Adventures of Superman by George Lowther”