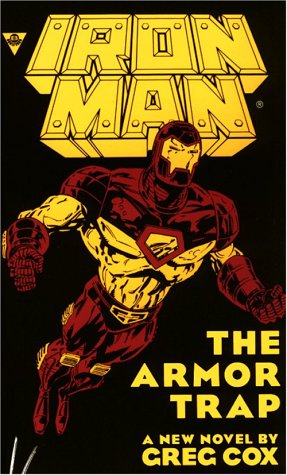 Earlier this week on Twitter, I asked people what got them into comic books. I was curious to see if I could discern a pattern in the responses. The answers were predictable in an interesting way. A lot of people pointed to books like The Death of Superman, The Killing Joke, Knightfall, and Watchmen as their answers. Yes, the “biggest” stories but also to a great deal the best. What made these people get in and stay was an encounter with a story so powerful it instilled a permanent addiction.

I would love to say my experience is the same. Ideally I should be able to tell you that I became a comics fan because perhaps I landed on a copy of Dark Phoenix or my library had the vintage Spider-Man essentials. It’s not. I can’t even cite the aforementioned Death of Superman or Knightfall as my reasons for becoming addicted. I read their novelizations and liked them but I wasn’t hooked.*

No, I fell in love with comics because one bored Friday I picked up an Iron Man novel at the local bookstore because the cover looked cool. I read the book the next day. I was so in love with it I bought the other Iron Man novel at the store a few days later. I read it, loved it so much I decided to read other Marvel novels. When I ran out of those I decided to finally try the comics. Now I have a library of comics and a lifelong fandom. All of this from two books.

Why? That’s the question that I couldn’t help but ask as I was studying my bookshelf this week. Why did these two novels make me such a fan? Fortunately I have this column and an excuse to reread the books. So I sat down and reread the books and came to a pretty good answer.

The two books, The Armor Trap and Operation AIM, form a loose duology connected by a plot involving an energy chip and writer Greg Cox penning both. Published in 1995 and 1996, they’re prime examples of the Boulevard/Byron Preiss Marvel Comics line. These books were really something as tie-ins go. Great cover art. Solid interior art. Bold design work throughout the line. Picking these books up made 14 year old me feel like I was getting an event each time.

The Armor Trap, the first in the line, doesn’t exactly fit that definition though. For the start of my fandom, I was surprised to find it a fairly modest story on reread. Tony Stark is kidnapped and forced to design the Iron Man armor for an unknown foe. It reads not at all dissimilar to a retelling of his origin, moved forward to then present day continuity. In fact, with ally James “War Machine” Rhodes looking for him, it’s impossible not to think of the 2008 movie. Much of this book is filler, mostly backstory.

Operation AIM is another story all together. 40 pages shorter but far denser, the book is essentially a giant teamup story as Iron Man teams up with Black Panther, Captain America, and War Machine to fight androids imitating their best known villains. It’s a lot of very cool fights and fanservice galore, even to a far better versed fan. In fact probably my favorite part of the reread was seeing just how many references to Black Panther’s lore Cox crammed in. That said, it’s also fairly thin on plot even still and once more heavy on backstory.

Rereading these books from a vantage point of 20 years of fandom, they really did feel like minor stories for the character. They honestly felt not unlike the Marvel Age books. They’re low stakes and characterization light. They’d never rank anywhere near the character’s best.

But they made me a fan. Why? Pretty simple: all that filler and backstory. Yes, I’m actually saying the flaw of something is the reason it worked for me. These books were one giant journey through the Iron Man universe along with touching on the rest of the universe. I basically read this book getting a list of the stories I’d devour as I got a feel for what an Iron Man story was. The rest of the Marvel line did the same for the characters I’d meet as I read their books.

This is the best thing tie-ins can do. They provide newcomers an entry point that they can grasp onto. They get the feeling of the world. Yeah, these are minor stories but they did the job.

Do I recommend seeking them out? Yes I do. They’re dated but they’re solid period pieces. Pick them up!

*They’re great books which I own but I’ll say it right now: They’re not getting covered here. Why? They’re impossible to discuss without covering the merits and flaws of the source material. I might as well write on them. Still recommended.