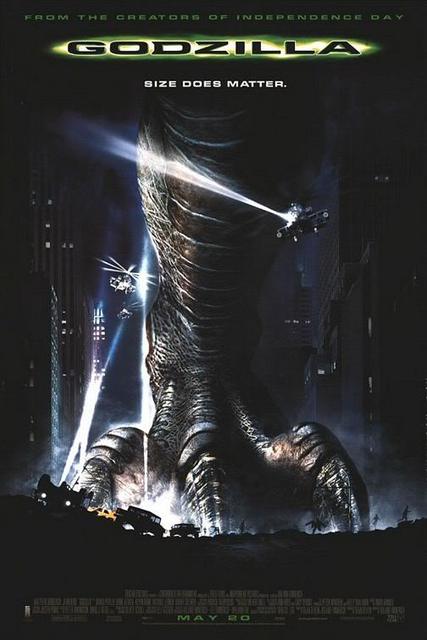 Has any movie in my lifetime had a greater ratio of hype to disappointment than the 1998 Godzilla movie? Sure The Phantom Menace might’ve set off strong amounts of rage but it was a box office beast on its way to a solid fanbase (which I’m in) and Justice League missed the mark with fans but we all could see it coming. No, no movie has ever whizzed past viewers quite as fascinatingly as Godzilla did.

For months before the film came out, we were bombarded with hype about how big this film was going to be. This was a HUGE film. You HAD to see it. It was THE film of the summer. Godzilla was going to be the MOST AMAZING THING EVER. Hype was EVERYWHERE. And then it grossed less than both giant rock movies, Rush Hour, and There’s Something About Mary. Yes after a year of hype, the movie defined by an indescribable gag outgrossed Godzilla.

So what happened? It’s easy to say that audiences abandoned the film en masse after the opening weekend but even that was weirdly low: $45 million compared to a $70 million opening the year before for The Lost World: Jurassic Park. Audiences were led to this film but they rejected it hard. Seriously, what happened?

I’m going to go in reverse order here to figure this out. So let’s start by noting the film sank like a stone after its first weekend. Why isn’t hard. The film isn’t that good. Oh I liked it at 14. I even bought the novelization after I’d seen it. But in retrospect it’s a dour film with disastrous cinematography designed to hide the look of the creature. Matthew Broderick was clearly trying to be the film’s Jeff Goldblum but I just loathe everything about his presence here and in general. It’s a film completely devoid of anything approaching joy.

It’s also a film made with full hatred for fans of Godzilla. His iconic design, the greatest of any monster ever on film? GONE. His atomic breath? Gone. His status at the greatest monster ever? Well there’s no sign of it here and the film even includes a long sequence of Godzilla fighting mini-Zillas rather than staying focused. Director Roland Emmerich was actually very open about his disgust for the source and it shows. Why would fans go?

So yeah, general audiences didn’t embrace it and fans hated it. But why didn’t the film open as explosively as it was hyped? Let’s look at that hype.

I’m firmly of the opinion that the Godzilla hype campaign was one of the utter worst campaigns ever and it’s only in retrospect that we see why. This was a campaign with nothing to sell. Godzilla was kept off screen aside from shots of his foot to “build the mystery.” Audiences didn’t care about that though. They got frustrated in fact. Sure Cloverfield got away with it but it was a fluke driven by an artful campaign. You really do have to show the monster in the ads.

What you don’t have to do is oversell the film and this more than anything else pushed audiences away. We were told for a year this film was going to be everything and it just pushed viewers away. Sure, Jurassic Park had a year of epic hype but it didn’t resort to the aggression this one used. (It was also more than promised.) With the grotesque tagline “Size Does Matter,” this campaign went out of its way to be gross and macho. So when the first signs that it wasn’t very good hit, of course viewers bolted.

And here’s something we need to address. In 1998, the Godzilla movies were not in a good place in the public consciousness. The hacked up dubs were all people knew. Aside from a 1982 film festival release, the original masterpiece hadn’t even played the US uncut/dubbed. These movies were unfairly a joke.

Studios have a really hard time understanding this about intellectual property. They assume that because we know a property or that it’s been around for forever viewers will go just because they’ve heard of it. No, we won’t. We definitely won’t go if it’s one we associate with feelings of ridicule. Godzilla, along with the same year’s Lost in Space, wasn’t a viable property without figuring out how to sell it to viewers.

And there was an idea. Jan De Bont’s planned version would’ve had a heroic Godzilla defending humanity against an alien. It would’ve used a classic version of Godzilla designed by the great Stan Winston. It would’ve been something big and epic which I think could’ve lured audiences in, especially the chance to root for Godzilla, which did happen in the superb 2014 version.

Let me return to the film itself. Godzilla 1998 is a movie with nothing to say. The 1954 film was an allegory for the atomic bomb. Jurassic Park was a study of man’s hubris to tamper with nature. Even Emmerich’s underloved The Day After Tomorrow was about the dangers of global warming. This movie is about nothing with no characters to enjoy watching or care about. It’s an effects show and the effects aren’t very good. They’re D-War level even at times.

Audiences avoided this movie because they demanded more. Not much more as Armageddon grossed a profane amount of money. But they demanded at least the charm of that film. And unlike many bombs, this one didn’t inspire a reevaluation. There’s not even much nostalgia for it from people who grew up on it.