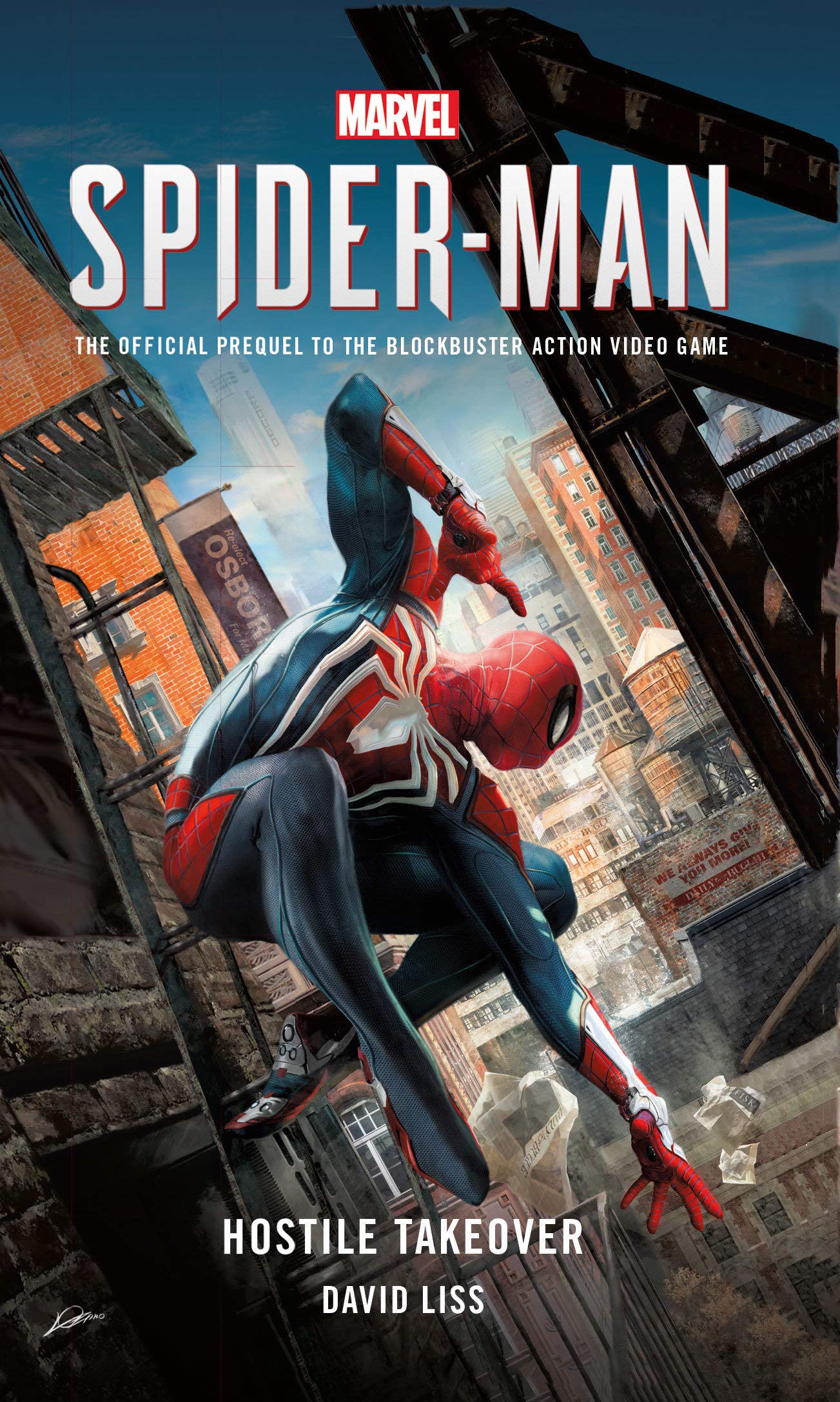 I won’t be playing Spider-Man for the PS4 when it comes out next week. Not that I’m against the game. I’d play it in a heartbeat if I had the system. I’ve dug every Spider-Man game I’ve played so far. I just don’t have a PS4.

That wasn’t getting in the way of me reading the recently released prequel novel Hostile Takeover by occasional comic writer David Liss. I haven’t missed a novel featuring Spidey in prose yet. Why start now? If anything, not getting to play the game made me more eager since I figured I’d enjoy getting a dose of the experience. Was I right?

The book tells a classic Spider-Man plot. Someone is impersonating him. It turns out they’re working for the Kingpin. Spider-Man has to stop the impostor and bring the Kingpin down. None of this is new and that’s great. This is a nice, solid, eternally effective story. This is after all setting up a new continuity.

And that? Well it’s kind of a new continuity. There’s a lot familiar here. Peter Parker got bit by a spider. He’s been at this since his teens. He’s poor. He has an aunt he loves. He’s a science genius. He’s in love with Mary Jane Watson, here a burgeoning reporter which marks the only notable change alongside Norman Osborn as mayor of New York.

What really makes this book feel different though? It’s the first novel to feel like Brand New Day era Spider-Man. That fits. The Marvel Press books ignored that era and the Pocket Books came before it. This is the first time Martin “Mister Negative” Li* and Yuri “Wraith” Watanabe show up. Peter and MJ have a strained relationship similar to that era. Harry is here once more as Peter’s best bud. This is honestly heavily reflective of the modern day and that owns.

The other thing that owns? Liss brings in a character I doubt we’ll be seeing in the game: Echo. The second graphic novel I bought was Daredevil: Parts of a Hole which introduced Maya Lopez, the perfect mimic whose deafness made her a counterpart to Daredevil. I love this character and Liss makes her a vital figure in the book, convinced Spider-Man killed her father and on the warpath. Of course this is inevitably rectified–she is a hero after all–but the conflict is fun.

I also liked the time given to MJ and J Jonah Jameson. MJ gets a lot to do in her role as journalist and it’s surprisingly effective for her. She’s always been tenacious. It’s fun seeing that at work. I also liked the handling of Jameson as principled but an asshole. It’s a hoot seeing someone walk that line.

Points also must be given to Liss’ overall style. It’s clean, brisk, with key details popping. He doesn’t waste our time and I’m glad for it. Comic book novels work best with a pulp vibe. You’re never unclear what’s going on or bored.

What I wasn’t so hot on was the impostor, the Blood Spider. I’m sorry, let me retype that, the Blood Spider. Yup. Still funny. It’s forgivable because it fits the pulp tone, but of the three antagonists, he’s the weak link by far. Just a macho doofus.

He’s not stopping me from saying this: this is probably the best Spider-Man has been in longform prose.** This is a cracking read that feels vital. I’m 99% certain the ending of the book is the start of the game. But if not? Well I don’t care. I’m not playing this. As a fun, fast paced Spider-Man story, this is as good as it gets.

*He’s known to be in the game.
**The Spider-Man anthologies are incredible. May be a future column.