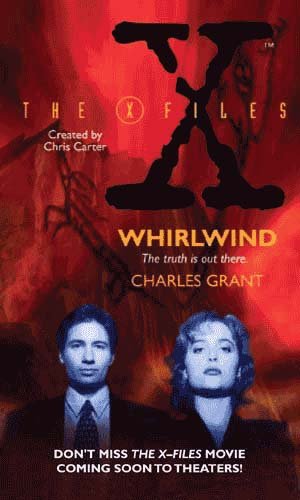 The difference in time between the first and second X-Files novels was barely five months. The first book was rushed out for Fall 1994 while the second landed in the spring of 1995. The third book would follow in December 1995. The iron was being struck hard, I stress. Goblins suffered badly from that rush. It suffered from trying to adapt an extremely embryonic property. Given that Whirlwind had only a few months more and the exact same writer, one could reasonably expect something no better than the prior work.

So it’s a real surprise to say the second X-Files novel is a dramatic improvement. It’s a classic example of The X-Files at its best even. A solid case highlighted by strong characterization and nice suspense, this is why the show endures. Given that it shares so much in common with the whiffed first book, the question has to be asked: why is it better?

The book focuses on, as the title suggests, killer winds that flay creatures alive. This is basically a cattle mutilation plot that turns to human victims. It’s made clear early on that it has something to do with a local American Indian tribe, but the exact connection isn’t the one you expect. It’s a standard case aside from being a bit more graphic than even the show would allow.

Once again, Grant keeps it simple. Once we figure out the Monster of the Week’s MO, we just sit back and watch the kills happen. I found the kills in Goblins quite dull, which makes sense. It was just an invisible killer. These though? They’re truly creepy with nice build up.

Grant also builds his world better this time. I was much more interested in the New Mexico environment he crafts. He easily could’ve gone in the expected white people vs American Indians route and while that’s there, he actually wisely makes almost every character we meet a member of the local (fictitious) tribe. This leads to the clever twist of the winds’ controller not out to get the cliched revenge but instead seeking power. Nice touch.

But what we’re here for is Mulder and Scully and this time, they’re themselves. There’s no awkward misnamings. Mulder is antisocial. Scully is a strong presence. Both are quippy. Skinner even shows up and is shown accurately. The general tone is even right. It’s obvious the six months made a difference. This actually reads like an X-Files novel and not a generic book with the license.

That said, is it a must read? If you’re a fan of the show, it’s well worth a look just for the fun of a good story not told on the show. However, it’s one I’d recommend finding used rather than new. It’s good but it’s not $6 on Kindle good. It’s a modest story that can’t quite justify full price.

Indeed I think modesty is what marks both of Grant’s books. These are simple, small scale cases that don’t really deliver anything so big you couldn’t find it on the show and that’s the hurdle TV tie-ins have to jump. Comic book novels can be slighter since they’re cheaper than the comic equivalent (usually) but TV is free. Star Trek crossed this with ease but these two? Not so much.

Bigger was what was needed. Next week we’ll see what happens when the case gets big.