This is a Patreon sponsored review requested by Lance Rutt. If you want to see me review something, just click here. 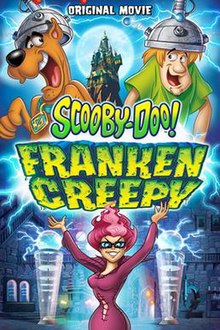 I don’t like Scooby-Doo and I’d never really say I ever did. I’ve always found the show agonizingly bland. I don’t really like the characters. I don’t find it funny. God knows the animation was repellent. It’s not for me and under normal circumstances I wouldn’t touch it.

That’s not how Lance Rutt sees it. He’s a huge fan and in our conversations he’s laid out an intense knowledge of the property. So it stands to reason when he had me take on a piece for my Patreon, he chose one of the movies. This is a fun opportunity so let’s give it a shot!

Velma (Mindy Cohn) receives an inheritance from a long lost relative that sends the Mystery Inc gang to Transylvania (sort of) where it’s revealed her ancestor was a madman whose legacy she fears. Once there, the characters suffer losses one by one. Velma loses her mind and becomes obsessed with creating a monster. Fred (Frank Welker) loses the Mystery Machine. Daphne (Grey DeLisle) gains weight. Scooby (Welker) and Shaggy (Matthew Lillard) lose their cowardice and their appetite. Can the team figure out what’s really going on?

So as you might figure from that description, this is not a revolutionary project for the series. Writer Jim Krieg is a veteran of the series as well as a frequent writer on the DC DTV films. He knows how to craft a solid 75 minute narrative that satisfies. This may be a familiar story but it’s an extremely well written one. The mystery is actually a fair mystery and it’s quite funny. I didn’t get every reference as it was clear this was something where knowing the show helped. I could still follow it.

It’s also a solidly animated film too. I’ve never particularly liked the animation on the show but this has the advantage of a nicely surreal setting that looks great. WB’s DTV team is in full force here and honestly this looks better than some of the DC films at the same time. Great color throughout. Visual gags are crushed supremely well.

The film benefits strongly from eschewing a celebrity voice cast. All the actors playing the main gang were their then current official voices which makes the characters invisible. Welker remains definitive as Fred and Scooby though his Fred now sounds like a kindly grandfather taking his kids out. Cohn has the spritely energy Velma needs which makes her sudden shift to insanity matter. DeLisle is one of the great invisible talents in voice acting which continues here. As for Lillard, I think it’s really the ultimate praise for his work on the live action films that he took over full time and you’d only notice it by his credit. He’s incredible in the part.

The film isn’t free of the issues that will probably always dog the series. There’s a certain 60s cloyingly hip quality baked in that it’ll never escape. No matter how hard they try to update it, that’s permanent. You also just know it’s building to the reveal of a hoax and the inevitability kinda drains the suspense a bit. But these are tropes of the series. If you’re a fan, you await those the same way I await the grand reveal in a Sherlock Holmes story.

But I’ve gotta be honest, I really did quite enjoy this ride. Perhaps I’m a sucker for the running gag of Fred being traumatized by his van blowing up. Maybe I liked the atmosphere. Whatever the case, this was good enough I’d consider watching another. So it is I’m gonna give a solid not bad.

Thanks to Lance for the commission and to his fellow patrons Chris Janisko, Connor Clay, and Sebastian Moreno.