With this column, I’m going to be looking at the place the B-movie lived its best life: Advertising. We all know B-movie ads were always better than the films, why not celebrate that? Get ready to look at the best of the worst.

Why did the B-horror die in theaters? There was a period where small town theaters lived on B-movies, especially horror, to survive. We’re a long way from that now. Yes I’ve seen movies in Morrilton, Arkansas but I don’t consider Collateral a B-movie. What happened?

There is of course no one answer. The film industry changes as much as an image on screen. But this question has fascinated me above all others. Why did something so prevalent just disappear in theaters?

Note: Before I get into the ads, I’m drawing from the Houston market. I’ll go outside for other columns but Houston was a perfect microcosm for this. Big enough to get all the blockbusters yet had areas small enough to get the Bs. 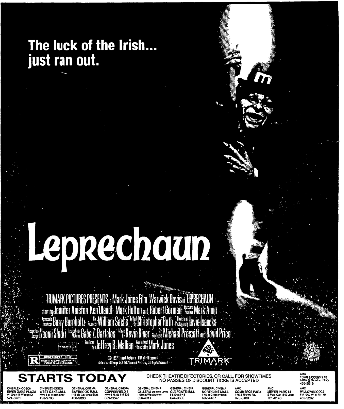 For example, take the Leprechaun franchise. It debuted in 1993 on 11 screens in the Houston, Texas market. Pretty broad range of locations too. It played in the suburbs. It played at the Galleria. It played toward the coast. It was given a giant shot in Houston and would ultimately play nationwide, making Trimark Films a force. Hell it outgrossed a BATMAN movie! 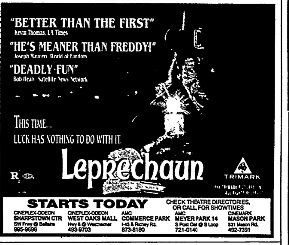 One year later. Half the screens. Almost all in, to be polite, not ideal areas. And this was for a sequel to a film that was absolutely a hit. But the sequel? It only did a mere 26% of the original. And Trimark wasn’t even done. They’d release into 2000. But this was the death of Leprechaun at the theaters with four films on video.

For my purposes, Leprechaun 2 is the perfect symbol of the death of the B-horror movie. It was an old fashioned release largely in a lot of markets but dripping out to other cities later. It was a creature feature/slasher film. It was sold on ads when it was actually stunningly dull to look at. Here is the last gasp.

So when did the breathing problems start? Well, a little context. I would make a strong case that between 1989 and 1996 horror was in utter hell. The genre had very few notable releases to the point we must call Leprechaun one. Yeah, you can name a few decent ones but horror was dead. 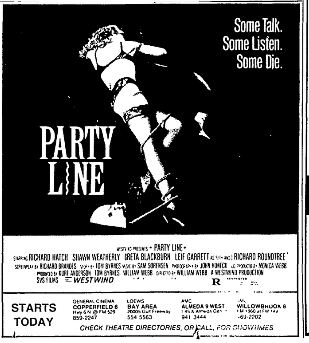 Good old slasher sleaze! This has neither a wikipedia entry or an entry in John Kenneth Muir’s Horror Films of the 1980s. It’s apparently a film about a brother and sister pair of serial killers thus probably only loosely connected to the title, a brief trend at the time. Classic exploitation. 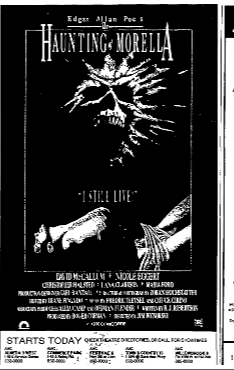 If I must, let’s get Jim Wynorski and New Concorde out of the way. In 1990, before June, two Wynorski films would play Houston screens. If you know anything about film, your soul is ashes seeing his name. New Concorde was Roger Corman’s last theatrical era and it is not his heyday. Lots of sleaze. 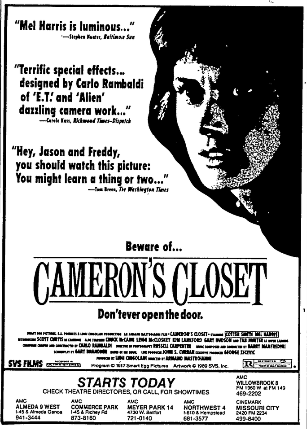 I haven’t seen this one but I recently read the book it’s based on. It’s a decent read. Apparently the film is faithful. It’s at least a great premise that’s lived up to. It sells you a serious take on a kid with a monster in the closet and you get that. 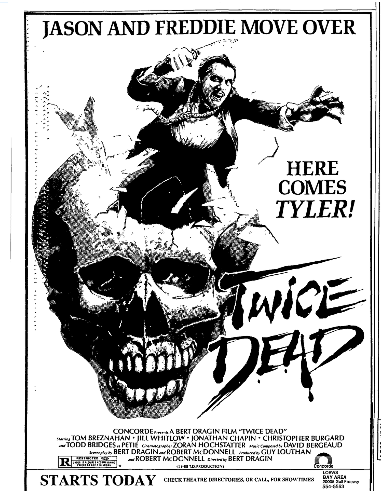 You do research like this to discover concepts like this so batshit absurd you need to explain them. It’s a movie about a silent film star who hangs himself only to haunt his mansion and eventually play a role in the climax involving the current residents of his home and gang members, one of which is the same actor as the silent star. I doubt this is good but I also suspect y’all might feel different. It’s easy to find floating.

Also a side note: How often did horror movies try to tell you you were meeting the next great horror icon and didn’t? Tyler definitely didn’t join those ranks. A few months earlier one Charles Lee Ray entered the scene but after him, it wouldn’t be until a constantly changing list of people donned a mask in 1996 that we got an icon. 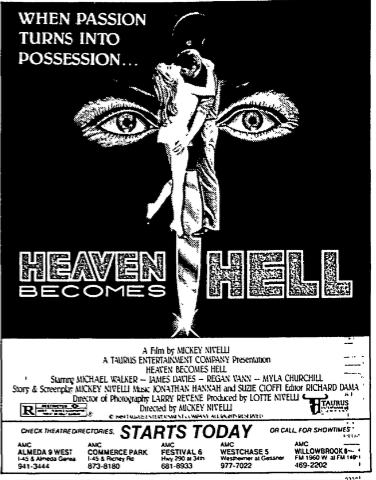 I have literally nothing more on this one than the synopsis. But first let me note that based on that image I expected this to be a dull, generic bad boyfriend movie. The synopsis: “In order to raise money to make an action movie, two actors start their own religion. However, things don’t go exactly as planned.” I cannot fathom how bad this movie is that it disappeared. Because that is one line that makes me need to know more. 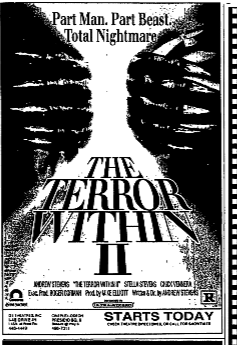 A prime example of how you could feel the mood dying. In 1991, this was the only good example I found. And this was when drive-ins were still around. But even the drive-ins in 1991 were showing Soapdish and Mortal Thoughts! I’m picturing Joe Bob Briggs staring daggers at a drive-in showing Soapdish! (A very good film aside from a transphobic punchline.) And to be blunt this is bad art. I’m not interested in this. Yet the first film in this set had an ad (of such poor quality in reproduction I couldn’t share) that was so horrifying seeing it at 35 gave me flashbacks from 30 years ago!

Now that the fun ones are gone, I have to be blunt, this era was a long, last dying choke of a gasp of the genre. In years earlier I could find so many good ones, ones I will get to. But I want to underline that late stage was basically softcore Cinemax crap dressed up as horror. This is all that btw, woman picks up a drifter for a one night stand and he’s crazy. Because frankly B-horror rode the wave of the entire genre and it was dead. So what changed? 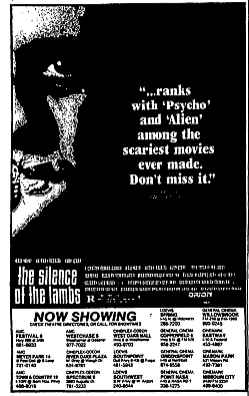 I want to use a theory from a friend of mine, the great critic Ryan Cullen. The problem the B-movie had was Hollywood started playing its game. And nowhere is that clearer than when Jonathan Demme decided to play in horror with The Silence of the Lambs. It’s a trashy, exploitative film about a serial killer skinning women to make a suit with an instantly iconic monster in Anthony Hopkins’ Hannibal Lecter and a nearly as iconic one in Ted Levine’s Buffalo Bill. It has a talky premise with an FBI agent consulting Hannibal allowing for all the filler. It literally has Roger Corman in a cameo. The Silence of the Lambs is in every way a B-horror movie except everything about it is so utterly brilliant the Academy gave Best Picture/Actor/Actress/Director/Screenplay to a February B-horror movie.

The second Silence came out, the door was open for Seven and Kalifornia. It was open for b-veterans like Sam Raimi to get giant budgets and weird amounts of freedom on two Spider-Man films. It allowed for Roland Emmerich to make Stargate and Independence Day. And it was DTV time for anyone else. 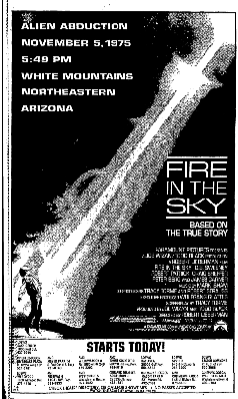 What does the Hollywood B-movie look like? Like this. Fire in the Sky is only not a classic B-movie because Paramount released it and gave it at least a decent budget with a good cast. (It’s also PG-13 because gore and nudity aren’t in the Hollywood B.) It’s still a movie with a great poster that’s actually way more scenes of talk than you’d think by a director who only went genre this one time. And it’s great. This is one hell of a scary movie even before the nightmarish final flashback that is the all time finest alien abduction scene. There is so much tension throughout. This one holds up and it’s what that poster sells.

I should note that even that film was more of a first spark in the engine. It wasn’t like the 90s were horror friendly. If anything the project that most took Silence’s baton and ran with it was a tv show, my ever beloved (rewatching now) The X-Files. Even good films like Wes Craven’s New Nightmare were ignored. It took Craven directing the hell out of Kevin Williamson’s masterful script for Scream for horror to truly be up and running. 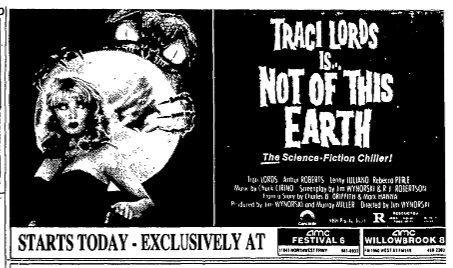 I also have to note the distribution game changing. New Concorde fueled a lot of these as Corman’s other ventures had. And then it died. You don’t see New Concorde much by 1992. But I share this ad, though not one of their last, to appreciate how very exploitative they were. They cast Traci Lords in a B-scifi movie to get her to do nudity. Corman went DTV as did Charles Band*. And that was that.

Leprechaun was notable as the one weird fist thrown towards the end. It was this unexpected creature jolt. It likely failed to repeat its business because it wasn’t that good. It wasn’t enough to revive the genre. There have been sputters, which I will get to, but overall Hollywood took the baton. 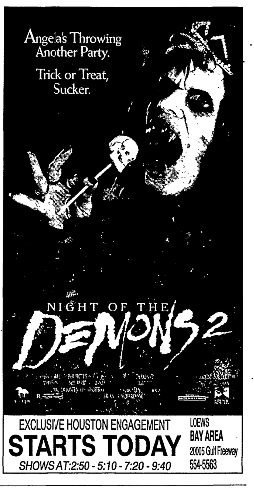 I’m not going out on a sad note. I’m going out on joy. We got one last good, weird blast with Night of the Demons 2, which hit Houston after Leprechaun 2 hit the nation. That’s a great poster. Such a great one it was seared into my memory to the point where a lot of my research stemmed from trying to find this ad again. This exact ad, which you see above. I should note that the film played on 10 less screens than its predecessor and on only one screen on the edge of town. But I have an image of a fan of the first film seeing this ad and driving to the edge of town and seeing it. It sounds like a pretty fun film based on the writeups. That guy? I hope he drove home happy.

This film also provides a perfect lead out in a few other ways, all tied to English-Australian legend Brian Trenchard-Smith. First, it was directed by the notable journeyman, whose war film The Siege of Firebase Gloria had its release alongside the original Night of the Demons in Houston down to side by side ads. Trenchard-Smith directed the next two Leprechaun movies.

And in 2001, he directed a movie called Megiddo.

Next time: The power of Christ compels you to go to the movies.

One thought on “The B-Section: The Death of the B-Horror Movie in Theaters”