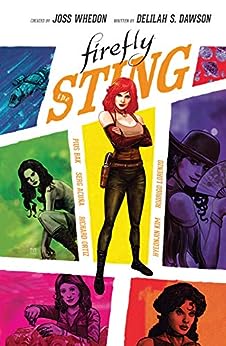 Complaining Firefly was cut down too soon is one of the least controversial opinions on the Internet. But of course it was. The show had a fun premise merging western and sci-fi aesthetics with an incredible cast crushing it on great scripts. Did it have problems? Well it was super white and the sexual politics were…yikes at times though far better than Buffy’s. Even getting a strong film to seal the show left me wanting more.

In short, it’s the perfect tie-in material. And there have been a few stabs. There were several miniseries from Dark Horse. There are a couple of novels from Titan Books. Boom is doing an ongoing series written by the great Greg Pak and we’re getting one-offs like this original graphic novel. It’s a continuity absent story, just a fun done in one. Great review content.

The premise is a simple one: The con artist mostly known as Saffron strands the Serenity on a planet and threatens to blow it up unless the women of the ship help her in a theft. A great character driven premise that should be fun.

So it frustrates me this is a divided review. Because here is a sharp divide between script and art. Dawson writes a solid, kickass script filled with fantastic character beats. She knows the voices of these women and highlights why no this isn’t Buffy with its faux-feminism that has aged poorly. These are strong characters and there’s refreshingly a nice sex-positive vibe. It’s funny too. It’s not a shocking story but it’s a fun read.

Too bad the art is utterly wretched. Five artists illustrated this book: Pius Bak, Serg Acuna, Richard Ortiz, Hyeonjin Kim, and Rodrigo Lorenzo. But this is a shock since it all looks the same. It’s ugly with faces that all look the same and they’re all horribly off model with only Inara vaguely recognizable. Zoe looks girlish while Saffron looks like the Joker on a meth binge. I get that likenesses cost money but that’s not stopped many great tie-in comics. I’ll also note nothing looks good to be clear with the characters simply standing out because of how character driven it is.

Thus what you’re left with is something that’s a near miss. The story is so good but it’s buried under the art.

But I’m still recommending this and I’ve got what I consider a good reason. We don’t have enough of this show to really get that annoyed over the art. This does feel like a lost episode of a truly great show that ended early. I don’t recommend buying it but Hoopla Digital has it. It’s a quick read. Give it a look.