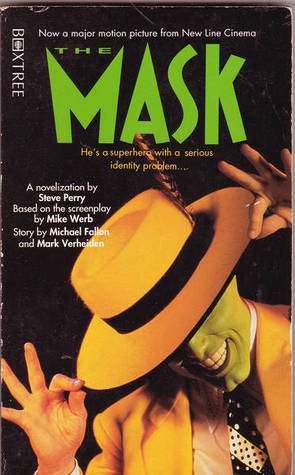 I rarely do movie novelizations on this column and it’s for a good reason. Most novelizations are by the numbers translations. I’m not against em. They’re often quite solid reads. But finding one I can write an essay on is hard.

So when I get a request, I perk up. Obviously there’s got to be something in the water to draw attention. That’s where we find ourselves today, looking at Steve Perry’s take on The Mask. I was asked to cover this and with the help of a donation by Jason Wells, I was able to do so. And I so don’t lack for material.

I’m only briefly going to discuss The Mask as a film because that’s not the subject today but I might as well get the boilerplate review out of the way so we can cover the book. It’s pretty damn good. Of Jim Carrey’s big blast of hits in 1994, it’s fittingly in the middle. It’s not disgusting on every level like Ace Ventura but it’s also not the cracking wit of Dumb & Dumber. It’s honestly more of a precursor to the modern comic book movie blend of effects and humor than anything else, a killer double feature with Deadpool.

And that’s where I’ll leap to the book. As is well known, the Mask comics are violent horror comics with a zany comic edge. New Line wisely saw Bighead (as he was called) as the next Freddy Krueger. Chuck Russell, who directed A Nightmare on Elm Street 3, was logically hired and drafts were written staying true to the comics. Except Russell rejected that direction and steered the film to the goofy comedy we ultimately got.

Having read the comics, can I just say this was a brilliant decision? The Mask comics are actually pretty agonizing. They’re relentlessly nihilistic with limited entertainment. We had a killer who worked on cartoon logic already in the form of Freddy. The idea of a superhero working on this logic? Maybe it’s not fresh but it is a good idea. So Russell was ultimately spot on.

But that’s where the book comes in. Because this was transparently a film that fully found its tone in the editing room. And this is a fun, rare instance where we can be sure of this because a workprint has floated around the internet. So a lot of scenes that were shot but cut found their way into the book, thus making it a novelization of that, not the film.

Since I’m assuming we’re all familiar with the 25 year old tv staple, I’m going to hit the big notable changes beat for beat before addressing the one huge change.

The book starts with the deleted opening with vikings landing to hide the mask. It was wisely deleted since it looks atrocious as filmed. But in prose, it’s a creepily effective, elongated scene that sets up something dark is coming. It’s very well crafted by Perry and has all the atmosphere the filmed version lacked. There’s some great tiny details.

There’s an extra beat of Stanley facing thugs he will later face as the Mask. It’s an unneeded cut and the book is a shade darker for it. When you’re trying to make your hero suffer, um, make them suffer.

A few extra beats between Tina and Dorian. Really plays up your sympathy for her and why she’d be ready to get away from him. Also gives her a bit more agency later.

Probably the single most infamous deleted scene is here. Reporter Peggy gets her comeuppance in a graphic death, being flung by Masked Dorian into a printing press and turned into a newspaper printed in blood. It’s horrifying but the absence of the scene not only implied no consequences for her betrayal, it allowed her to come back for the cartoon. Really I get cutting this because it probably crushed the PG-13 rating and is such a jarring tonal shift but throw in a line of her getting arrested or something.

And then there’s the change I really want to go into. It’s the overall tone. Things play very differently between media. A hilariously funny joke can fall flat in execution without the music of the delivery. A graphic scene can linger longer in print. This? It’s proof because this reads more like a standard CBM with very to the point descriptions.

This is because that was Steve Perry’s background. Perry, who scored Shadows of the Empire off this book, really is an unheralded great. He was a tv writer in the 80s and 90s with credits on The Real Ghostbusters, Batman: The Animated Series, and Gargoyles. His novelizations include the Resident Evil games, the Alien comics, and the Alien vs Predator trilogy. He created Teras Kasi! Steve Perry is a true legend of the field and credit is due.

So yes, this book feels far more in line with Gargoyles than Ace Ventura. His fingerprints are very hard on this book in a way few novelization writers pull off. Every scene is shaded with the idea Edge City is a crapsack world without hope. Every character interaction feels a bit more uncomfortable. Even when things are funny, there’s a point remove in how they’re described, very matter of fact which makes them a bit creepy really.

I don’t want to say I prefer this version of the story to the film but I kinda have to because it’s more in line with what my taste is. The movie milked every comedy beat while the comics were aggressively ugly. This was the perfect medium. It’s fun but there’s a real sense of weight to everything that’s happening. I had a really great time reading this book.

2 thoughts on “The Tie-Ins That Bind: The Mask by Steve Perry”