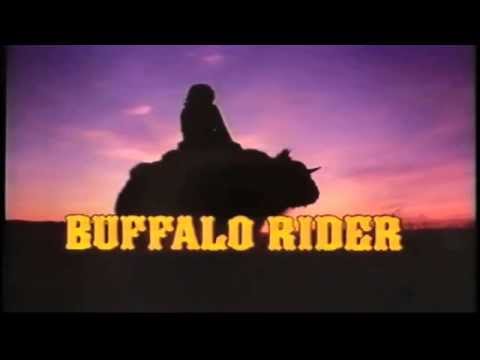 B-movies have a weirdly narrow definition to the mainstream public. When they hear b, they think films by guys like William Castle (who was actually incredibly mainstream), Ed Wood, and Roger Corman. Genre films. Monsters.

B-movies of course span all genres. There’s a b-movie festival for literally any kind of film you can name. My goal for the next year with the b-section column is to highlight how true this is. And I’m going to review a lot more b-movies. I’m kicking off that mission with a film at least some of you know scenes from. Yup, time to meet a guy on a buffalo.

Buffalo Rider is about as classically a b-movie as it gets. It has a 1976 date but played around the country as late as 1980. It has two separate titles (The Life and Times of Buffalo Jones) on it. It was essentially self distributed. It is cobbled from so many disparate threads and desperate attempts to make the thing hit a feature length. It’s poorly acted to be polite. But I want to stress: It actually played theaters.

The plot centers around Buffalo Jones (Rick Guinn), a guy who tames a buffalo, makes enemies of buffalo hunters, gets injured, makes friends with locals. Then the hunters shoot family of the locals, Buffalo Jones finds this out, rescues a child, gets revenge, moves on.

The plot I just gave you is more coherent than what’s on screen. It’s largely quick shots explained with narration or dialogue that’s outright exposition. At one point the film drops the plot for a cliched 10 minutes about a raccoon named Bandit. There is so, so, so much padding. Zero character.

In other words, it’s what a real b-movie is. We think B-movies are all fun, campy journeys into cheap sets but they’re not. They’re desperate attempts to just get something out. They’re a con basically, using the power of a good premise (badass western about a buffalo rider) to cover the reality (a few good buffalo stunts and a lot of woods footage.) A movie like Buffalo Rider is not for amateurs. But if you’re next level, I’m highly recommending the experience.

Buffalo Rider belongs to the underloved wilderness movie genre. These films had nothing else to sell usually except the promise of stunning scenery. And since a great view is easy and cheap, they fill the film with it. What results is an oddly meditative experience where you’re just soaking in the flow.

Because seriously, this thing looks incredible. Even in the low quality version I had, the movie shines. Gorgeous mountain views, flowing streams, and vast prairies are great to look at. It’s basically a low budget special effects film in that way.

Then there’s the film’s wildly unethical animal stunts. Oh this is NOT a film for animal lovers. You can’t miss how this was wall to wall animals being forced to fight like two bears do or the way that raccoon was probably several raccoons who definitely died. At one point Guinn is actually attacked by a cougar and the injuries he shows off are all too real. There is something very wrong about this. But dammit it’s not unentertaining and I’d lie to say otherwise. A good b-movie tests your moral compass.

There’s also something weirdly comforting about the narrative. It’s a simple tall tale. The story is supposedly the narrator telling his granddad’s history. It feels like a family myth shared generation to generation. The thin acting and story? They’re how they feel to us. It’s a mythic story.

A movie like Buffalo Rider is easy to laugh at but it’s effective. It’s decidedly easy to watch and if you’ll let it be the oddity it is, it’s worth your time. It’s on youtube. Yes, seriously, seek it out.