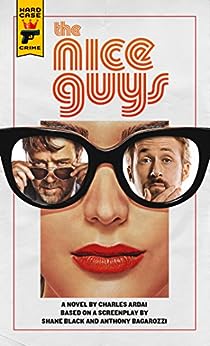 Cold take: Shane Black and Anthony Bagrarozzi’s script for The Nice Guys is one of the best comedy scripts of the last decade. It’s on par with The World’s End, Bridesmaids, and Popstar: Never Stop Never Stopping for most quotable, funny, potent scripts. And as I’ve tried to establish before, that should be the death of any novelization. Comedy does not translate at all. What works on the screen is specific to the screen and novelizations almost never nail that. It’s even worse when you consider how specific the voice of this film is. You’d have to try extra hard to pull this off.

So how the hell is this book a perfect translation?

Charles Ardai’s novelization of The Nice Guys is that one in a billion fluke. It’s a novelization that captures the exact note the film captured. It’s sun drenched 70s pulp sleaze that like the film is utterly in love with its own voice. If you’ve seen the film, it’s actually a solid companion as it thoroughly retells the story in a distinct manner that only makes it better.

And there’s a good reason for it. Before I get into the book, it’s important to stress exactly how important Charles Ardai is to the pulp world. This is not a studio employee translating a script. Ardai cofounded and edits Hard Case Crimes, an imprint that publishes both reprints of classic noir from the greatest writers ever and new books from great modern pulp writers. Ardai himself, under the name Richard Aleas, has written several pulps and they’re grim but effective.

So this was in the right hands. And reading this book, it’s obvious Ardai wanted to simulate the 70s pulp feel. There isn’t a single stray word to give away the book was written in 2015-16. It’s source study done right.

Ardai wisely doesn’t diverge from the story of the film. Two private eyes cross paths investigating cases that turn out to be the same case. It’s a solid plot for the genre and he clings to it.

What he does do is an old pulp trick that I love seeing. There’s a lot of patter in this book. So much repetition of details. Another writer might say “he heard banging in the trunk.” Ardai writes “Something was banging around in it. He walked over to the car, stared at it. Bang, bang, bang. There was someone in the trunk. Hammering to be let out.” It’s a musical image that gives the book a jazz feel. There’s so many sentence fragments, one line paragraphs. and distinctive images. This book is actually a blast to read.

And that’s really the book. It’s pure jazz. Just nonstop in love with words. A tiny description like “they didn’t issue desks and flags like that to anyone” tells you so much more than a conventional description. This is a specific, bold book. It adds so much to a great film.

It’s so specific discussing it feels useless. So I’m going to be succinct: If you love this movie, buy this book. It’s a great read.

Next week: Peter David’s Hulk ranks with the best comic runs ever. And there’s one story most readers of his run haven’t read. What Savage Beast awaits next week.