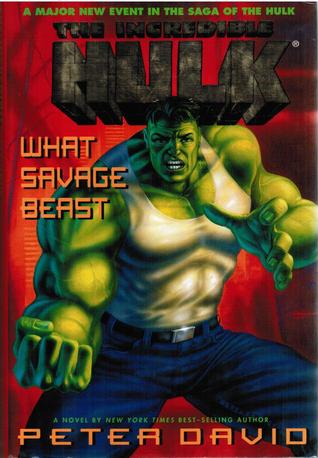 Time to discuss an oddity as tie-ins go.

We tend to draw a very clear line between stories “counting” and “not counting” with tie-ins. Obviously, if it doesn’t happen in the main medium, it doesn’t happen. Star Wars will always put what happens in the movies first with TV counting close now. The MCU has put the movies first with TV not counting at all. Star Trek only counts what happens on screen despite an epic amount of prose. And of course, comics only count what happens on the page.

So I’m going to stress as I review this book, it absolutely did not happen in canon. It’s never been referenced in canon. And it absolutely would have if it were canon. This is a pretty major Hulk story. But no, it DID NOT HAPPEN. Except…this one isn’t as easy to brush off as just saying that.

The Incredible Hulk: What Savage Beast is the rare time we’re dealing with a tie-in by the original writer. The book takes place very specifically during Peter David’s legendary epic run on the character and indeed was penned by David himself. This may not be a canon story, but can it easily be ignored just because of that? Of course not. It’s a big epic original Peter David Hulk story. It deserves respect as a vital addition to one of the greatest comic runs ever.

The book takes place just after the fall of the Pantheon so neatly tuck this between that and the Ghosts of the Future Epic Collections. The Hulk is “Professor Hulk” or (what was thought to be) Banner’s mind in Hulk’s body. He’s on the run, hiding out with his wife Betty and hunted by a Major who blames Hulk for his uncle’s death. When a chance at a normal life, a cure for the Hulk, is offered, he takes it and finally gets the peace he wants. However nothing is going to be that simple. Not even remotely.

So this is a hell of a book. Of course it is. I noted I consider David’s Hulk one of the great comic runs by a writer. That’s because David did whatever he wanted on it. He did classic Hulk stories. He made him a bruiser in Vegas. He did big sci-fi concepts. He had fun with the idea the Hulk had multiple sides. He even did a dark future story where the Hulk met his evil future self. David did everything a writer could do and the book was genius for it.

Naturally a novel set in that run by its wellspring, an accomplished novelist in his own right, is going to be a great read. That’s because David does the same thing here. He tells a broad story that hits multiple notes. There’s some sci-fi. There’s some fantasy. There’s a lot of good action. There’s some poignant character beats. And it’s all premium quality.

It’s also all very well managed. David juggles a lot of tones in his work but he’s never amiss at it, a skill he keeps up to his current work. Everything feels right. A well timed joke breaks the tension while we never forget the stakes are sky high. It’s just balanced to a T.

This is also a big book, which makes me wonder about its origins. This is a very thick, dense text at nearly 400 pages in paperback unlike the standard 275-300 pages of the Boulevard era. I strongly suspect this was a storyline David wanted to tell in comics and the unfortunate Onslaught/Heroes Reborn/Heroes Return derailed it. The timeline roughly fits. I suggested this go between the two epic collections and it feels like one with essentially three stories that cohere into one saga. It’s written like a comic story for certain.

So I go back to the idea of “counting.” This book doesn’t “count” but if you love David’s run, it’s a must read. A vital, powerful story of the Hulk facing triumph and tragedy by his definitive writer. It’s out of print but worth tracking down.

One thought on “The Tie-Ins That Bind: The Incredible Hulk: What Savage Beast by Peter David”