So… For a few weeks I’m gonna be giving y’all TMNT content in honor of the 30th anniversary of the 1990 movie. Why is that notable? Well, for my money Teenage Mutant Ninja Turtles is one of the greatest comic book movies ever, a faithful adaptation that captures what made the comics great yet also drew on the TV show for a few key elements. And that’s not nostalgia. I rewatched it today and it’s aging gloriously. Since I love it and of course the TMNT in general so and, you know COVID-19, I figured I’d distract myself by writing on the Turtles this period. So here I go.

And why not kick it off with a look back at the ads for the first 3 movies as well as a number of great weird ads connected to the TMNT. And trust me, there were A LOT. 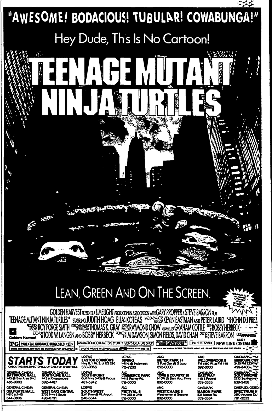 What a great but also kind of weird poster this is. There’s an iconic image with the heads of all 4 Turtles looking up from a sewer. It tells you the beloved characters are coming in live action. It sells the film. But it’s off. For one thing the heads are just barely visible. For another, that’s not really what they look like here. These look more like action figures than the more detailed heads we’d see in the film. Also, the tone is all jokey. The film, while funny, is closer to Lucio Fulci New York exploitation than light comedy honestly. It’s an interesting try. I should also note this was a modest ad in the paper.

This was bigger in the same section. But of course the film would do better and better than expected. 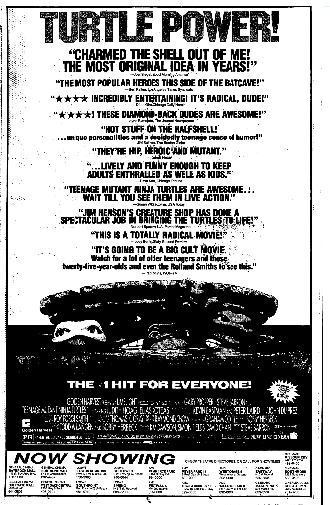 One week later? Full page ad. I had this on my fridge.

Oh I’m glad I found THIS wild ad. An Easter themed Ninja Turtles ad. Another full page btw. New Line was an indie and they were riding this hit hard.

Can I make a case this was the best campaign ever? A new ad every week and all just incredible.

They parodied Pretty Woman! Come on, that’s gold. This was the end of the fun ads but just a gleefully creative campaign for a film that had to fight to overcome a lot of biases against it.

As basic a poster as they come. It sells the premise and you’ve got the TMNT out front. What’s with the canister? Watch the film to find out. It feels like a continuation of the last campaign but a bit more mainstream. They know they have a hit. 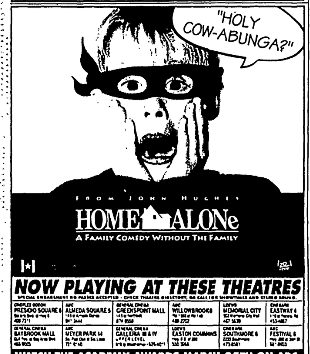 And they had such a hit another film had to jump in. Home Alone was at the end of its run and this was a way to goose the numbers. Nice.

I feel like it says a lot that the second week’s ads were just not as ambitious or big. But at least they’re still decent ads. 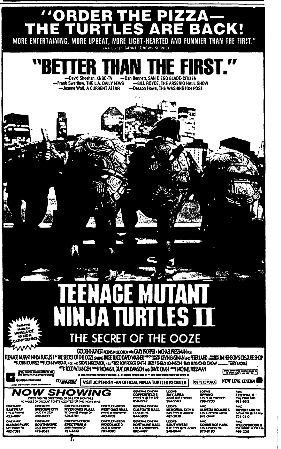 What the hell is this? This is indeed what it looks like: The Turtles from the back. That’s an oddly unappealing ad. This doesn’t sell anything fun. Sure those are still identifiably the characters but it’s ugly. 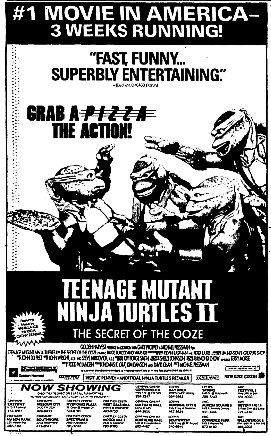 Recovery! The next week was a much better ad. And notice something important: still a big hit series. Three weeks in a row. That said this ad was repeated the next week. And the next week went back to the second ad.

I’ll get to the movie. But this is a great poster. You get so much info in one shot. The Ninja Turtles have time traveled to Japan and the scepter played a role. It’s stylish. It’s big.

Even with the occasional dud ad, seriously this series had great advertising. Big distinct ad showing off the…unfortunate looking Turtles. Like it’s clear how much worse the suits are now, right? I like that the time travel bit from poster 1 is here in a cameo. Great poster even if the decay is baaaaad. BTW they kept this ad the next week and the next though they lost the #1 film note. That said, week 5? No ad. You can mark that as a perfect sign of the times. Two ads, one repeated 3 times. The towel was thrown in.

Yeah. A low key ad for a film that was weirdly both a nostalgia punch and not truly enough of a nostalgia punch to matter. But if you saw the first ad? You’d have to be excited by this one. And damn right I was at both opening days.

As for 2014/2016? Newspaper ads weren’t really a thing for them. Great posters though. And one last time, a bonus.

Nope, this isn’t interesting to any of you. But it is to me. The movie listing for when I saw the film. Nice to have. 1:15 showing btw.