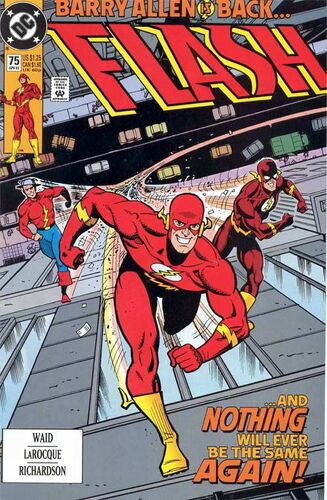 This was a commission. Warning: full spoilers

This isn’t something I’m going to argue. He got the perfect ending in Crisis on Infinite Earths. His story reached a finale that was fitting on a level few characters finales ever can be. Since he returned in Final Crisis/The Flash: Rebirth, he’s added less than nothing to DC. He added far more dead than alive.

What’s more, his role was filled by his wife’s nephew Wally West, an extremely popular character readers had embraced as The Flash. If Barry was the symbol of a hero who gave everything for the job, Wally was the symbol of a student taking the master’s place. Wally was an aspirational character the reader could connect with. What he’s become since…I expect Linkara to cover Heroes in Crisis. Trust me, I’ll agree no matter how mad he gets.

So with that bile and rancor spewed, we’re going to look at the first time DC raised the possibility of Barry returning. This was a book I read in 2007, thought brilliant, then reread in 2019 and really thought was brilliant. Yeah, this is me in full praise mode today and it’s the best kind because I get to praise a comic with a lot to study.

The premise is this: Barry Allen miraculously shows up alive with memories missing after his death in Crisis. It’s a moment of joy but Barry quickly goes off the rails, viewing Wally as less than him. It doesn’t take long for it to become all too clear this isn’t Barry. Who it actually is will force Wally to finally stop feeling like Kid Flash and truly become his role.

As I said, this is a masterful book. It’s a book that maybe felt like a cheat on release but doesn’t now. You know reading this that you’re being lied to. What you want is a good lie, a story that justifies the lie. And you aren’t let down.

The story works on two fascinating levels. The first is the way Wally confronts his mentor’s ghost. He doesn’t feel like he’s earned his title. Which he realizes is untrue. This is a story about literally confronting your doubt and impostor syndrome. What a great concept that is.

It’s also a symbolic burial of the pre-Crisis hero. Wally takes on the mantle of the Flash and in so doing puts to rest the impossibly pure archetype whose only flaw might be being forgetful. Wally is flawed. He’s not a genius. He’s brash. He’s impulsive. He’s just a guy.

But then there’s the other side of the coin. As I said, to pull this off, the answer to who “Barry” was couldn’t just be some guy. It needed to be an even better story than Barry Allen back from the dead. And Mark Waid had one.

For false Barry turns out to be none other than Eobard Thawne, the Reverse Flash/Professor Zoom, before he became a villain, In fact at this point, he’s a Flash fanboy from the future who went so far as to have plastic surgery to become a clone of Barry. When he accidentally travels back too late to become Barry’s partner, he discovers he’s fated to not only become his ultimate foe but to die at his hands.

What a brilliant hook. This is a story about the concept of fate, a tragic concept. Thawne is destined to become the very thing he hates. And there’s not going to be any safe out on it. He’s destined to let his idolatry of Barry Allen curdle to hatred, a contrast to Wally’s deep love for the man preventing him from earning his role as Barry’s successor. That hurts to see.

The story hits on a deep, sad truth. Maybe we don’t become the enemy of our hero, but how many of us have turned staunchly critical of people we once loved. There’s such a thin line when you have passion about a person. It takes the slightest provocation to turn that. (See Change the Channel.)

Wally earns his place because he is able to take his feelings about Barry and use them to make him a better man. Eobard is bitter at the idea he can’t be his equal no matter how hard he tries and thus tries to replace him and at story’s end, though he remembers nothing, he knows he hates Barry Allen. And destiny is sealed.

If this book has any weakness it’s the art. It’s not bad but it’s not great. You’ll be hard pressed to remember it nearly as much as the writing. It’s that 1990s decent enough style. Everyone wanted to be McFarlane or Larsen. It gets the book told but nothing more to say.

The Flash: The Return of Barry Allen is a wonder. What could’ve been a gimmick becomes one of the best stories of its era. Seek it out.