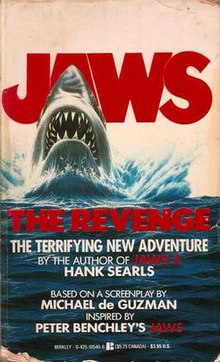 Jaws The Revenge has managed a rare feat. Despite one of the silliest premises ever, a shark getting revenge apparently, it’s not a film that the bad movie fandom likes very much. How can what seems like such a surefire bad movie classic be ignored?

Well, it’s one of the most joyless films ever. There is nothing entertaining about Jaws 4. It plays like a bad TV movie. The effects are awful. The pacing is dreck. There’s nothing to look at. It’s astonishingly awfully acted. Even the opening credits are unwatchable. Remove the Jaws name and it’s forgotten.

But we’re not here to look at the boring movie. Oh no, if the film lacks any reputation, the novelization is the opposite. A work of rare weirdness, Hank Searls took a nothing script and crafted a work of sheer absurdity that gave us a phrase that managed to become a TV trope. Think about that: A novelization gave us the term voodoo shark. This is one of the singular genius novelizations of all time. Let’s get to why.

In broad strokes this is the plot of the movie. One of the Brody sons dies. Ellen Brody goes to the Bahamas to recover with her other son. She meets and falls for a pilot. Then the shark that killed her first son starts attacking. Eventually it has to be killed. It’s basically the film

And in what it adapts, the book is superior just in the details. Searls fleshes everything out and gives every character motivation. He also has a good eye for scene and detail. There’s a clear portrait of what’s going on in this book which I read before watching the film. It’s definitely a brisk moving book.

The changes though? Well those two make it worth seeking from the Internet Library.

The most famous is the Voodoo Shark. It’s as ludicrous as it sounds. The child of the sharks from the first two Jaws movies, this shark was controlled by a witch doctor who had a grudge against Michael Brody. This means we get not only a voodoo plot but countless scenes from the shark POV. And it’s absurd but it’s glorious. Trust me, this plot is gold.

The second plot explains Michael Caine’s Hoagie. He’s ridiculously useless in the film, especially for a character played by the genius Michael Caine, but he has a purpose here. Oh does he have a purpose. He’s an undercover DEA operative bringing down the dealers who got his daughter addicted and killed. Watch the film and realize this plot in no way could be added on but it is here. And it’s a plot. It’s not boring at all.

These two additions change the work immensely and both ultimately achieve the same outcome. They give it flavor. Jaws The Revenge is boring and pointless with signs of being hacked up. This is a silly, absurd ride but it ain’t dull. Had this been the film, hell we might’ve gotten Jaws 5. It’s just that much fun.