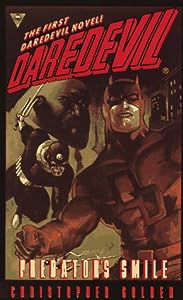 Daredevil kicks ass. A highly moral in code yet personally decidedly morally tarnished hero. So Catholic he’d make a dream Kevin Smith hero (and did in a brilliant arc). Flawed, broken, but good. Subject of an excellent film and show. I love Daredevil.

I’m long overdue to cove the character here but there’s a big issue. He only has two original prose novels and an anthology segment. So there’s not much of a chance to cover him. But I figure I should anyway.

And wow do we have a wild swing for the fences to look at here. Christopher Golden’s Daredevil novel Predator’s Smile is intended to be new reader friendly and largely is with a full discussion of the lore. But it is set after a specific issue. Issue 233. The end of Frank Miller’s Born Again. This is a direct follow up to Born Again set in the one month gap between 233 and 234. That is ambition on a level I can’t fathom. To look at one of the most universally, rightly acclaimed stories and add a footnote. But we’re in Christopher Golden territory and holding back isn’t his style.

It’s a simple plot. In the ashes of the Kingpin’s empire falling, a new power player rises. This player hires Bullseye. Matt Murdock gets involved. There’s a lot of violence. There are appearances by Black Widow and Gladiator. Nothing shocking to a DD fan.

But what makes this book stand out isn’t a complex plot. It’s how utterly spot on Golden gets Miller. This feels like the arc he never wrote. It’s a fun bridge story that has all Miller’s atmosphere and texture in prose form, something lacking from the Man Without Fear novel.

It’s very obvious Golden either did his research or more likely was already a DD fan because this feels right. When I read this book in 1998, I didn’t get any of the references in it but having read a large amount of the character’s many great runs, this is stacked with callbacks to earlier stories. Every woman Matt has dated gets a reference with two major players in the story. Many of his major rogues get noted with two main characters. There are so many tiny notes.

And the tone! Golden usually works in heightened stories such as the Mutant Empire trilogy, his collaborations with Mike Mignola, or his own stellar horror books but he shifts smoothly to the relatively grounded territory of crime. He gets how a good line can do more than a paragraph of bland detail. Everybody has just the right quips. The violence has weight. This feels perfect.

It is a bit long. I’ll grant that this is a longer book than maybe it needed to be. There’s definitely bloat here where 50 pages less would snap. It’s good so I give it a pass on this front. But it’s worth a note.

The book is, like all but the three omnibi, out of print right now though it did get a Dreamscape audiobook. I say ante up for it on Amazon. Worth it.

One thought on “The Tie-Ins That Bind: Daredevil: Predator’s Smile by Christopher Golden”